Williston Goes All Pink and All Out For Breast Cancer Awareness 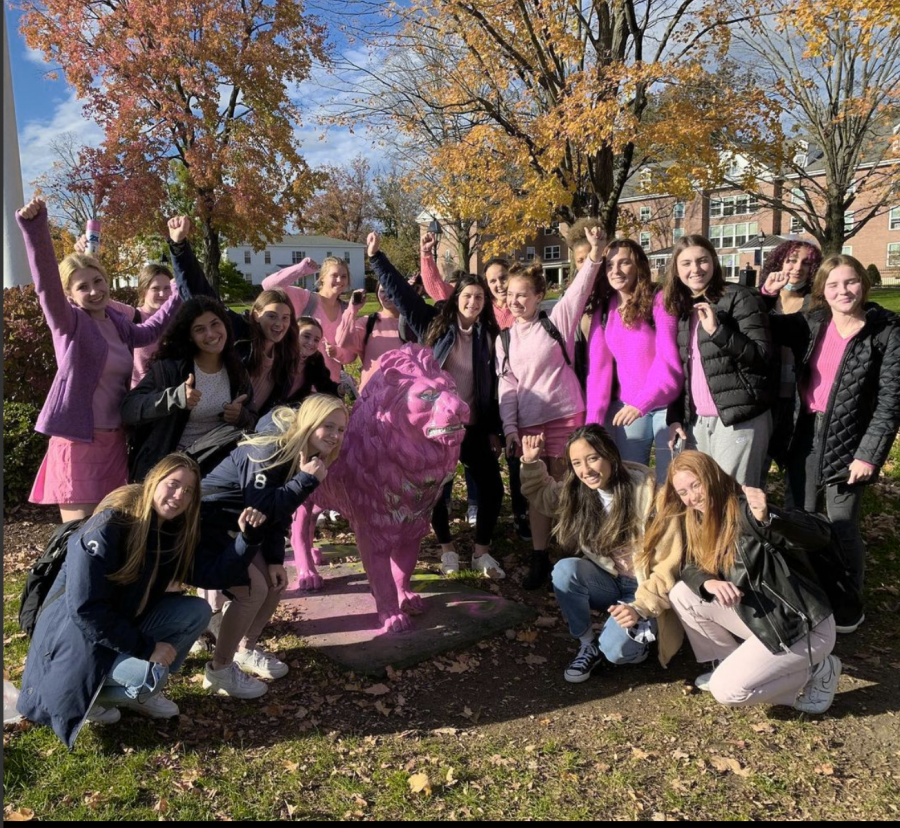 For two consecutive weeks, the volleyball, field hockey and girls soccer teams have been scoring major points for breast cancer patients, hosting games to raise money for cancer research at Massachusetts General Hospital and other organizations.

The Volleyball team had its cancer awareness game on Friday, October 22 against Worcester. In order to collect funds, the team baked and sold a variety of cookies, cakes and other desserts. In addition, they decorated the gym in all pink to make the cause have an even stronger visual presence.

The cause was brought by one of the varsity captains, however, all teammates participated in different roles.

“It was spearheaded by Grace Bean but the whole team got behind it,” said Volleyball Head Coach Tyla Taylor. “Everyone had a different job, weather it was baking goodies to be sold, or getting the word out about breast cancer awareness. And also to get people pumped for the game and get them to come.”

Breast cancer is the second leading cause of death in women in the world, killing forty three million people a year in the United States. This type of cancer starts in the cells of the breast, growing and invading the healthy cells of the body. According to Breastcancer.org, one in eight women are to develop breast cancer at some point of their life, accounting for 12% of the total cancer cases in the world per year. In recent years, incidence rate of the disease increased by 0.5% each year.

The Volleyball team was able to make a connection to the hospital by the “A Shot for Life Foundation,” an organization for athletes in the Massachusetts area. The purpose of the institution is to help raise money for the cancer research department at Mass. General Hospital.

Coach Taylor said despite the loss to Worcester, the game was an overwhelming success.

“We lost and that was disappointing, but the bigger, more important purpose of the game was that we raised a lot of money and that we were able to donate to Mass General Hospital,” Taylor said.

The Girls Varsity Field Hockey team, which turned out victorious against Suffield with a score of 8 to 1, also hosted a fundraiser. They raised money with the sale of food from the Williston food truck. Every purchase came with a raffle ticket.

As Sarah Markey, Senior Class President and Field Hockey player said, “Breast cancer is unfortunately common… everyone knows someone who has been affected by cancer. As  a group of girls on this campus, the cause is particularly close to all of us.” Sarah disclosed that her grandmother suffered from breast cancer. “I couldn’t play in this game without thinking of her,” she said.

Girls Varsity Soccer team played a game for cancer awareness too. The team experienced a win both on and off the field. “I feel like we represented [both] the cause, as well as the school,” said senior goalie Selena Negron, who added that she tries to “wear my pink uniform as much as I can during the month of October.”