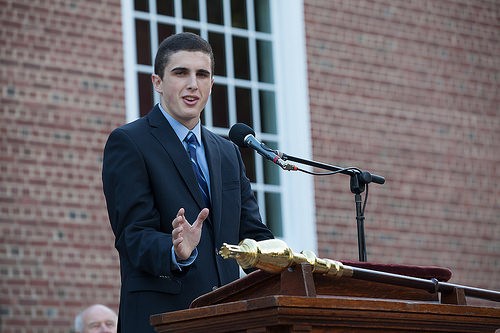 A new two-tiered voting system has been established to elect positions for the 2015-16 Student Council.

The first tier, or step, of this process involves electing a Class President for each class. All interested students gave brief speeches at their respective class assemblies on April 17th and presented their platforms on which they were running and their qualifications to represent their classes. Later that day at lunch, students voted for the candidates to elect class presidents.

On April 21st, there will be runoffs for the classes of 2017 and 2018 involving two candidates for each class. Due to allegations that members of the junior class submitted multiple ballots, all candidates for Senior Class President will be on the ballot.

Once the first round of elections has finished, the second tier begins on May 1st. In this second stage, each class elects four at-large class representatives.

This system replaces one in which students used to for specific positions such as vice-president, secretary, and treasurer.

Current Senior Student Body President elect Emmett O’Malley says, “It’s a simple solution: simplify the voting process so that the best five representatives in each grade are the five members of the Student Council for that grade.

In an email to students announcing the new elections, Dean of Students Ms. Noble wrote, “The rationale is that by voting for individual positions, those with extensive student leadership experience may be eliminated due to the position they choose to run for, rather than their experience and competency as a student representative.”

This new system ensures that the students who are best fit to represent their classes get elected.

Senior Class secretary Maisy Glick said of the new election method, “Our goal in setting up the new two-tier election process was to create the opportunity for each class elect their top five student representatives. With the former process, the five most eligible candidates may all run for president, meaning that four great community members would miss out on representing their peers.”

Glick adds, “The problem that I saw was that individuals who were perfect candidates for Student Council ending up losing out because they ran for a very competitive role. A big part of why we wanted to reform our system was to have a student council of the most enthusiastic and hands-on individuals.”

This is one of the biggest changes initiated by this year’s student council, led by O’Malley. He said, “Coming into the year, I knew I wanted to restructure the voting process. I proposed it to the rest of the Council, and there was agreement across the board. From there, it was really just working through the details.”

Stay tuned to our website, Willistonian.org, for the latest updates on the Williston presidential and representational races.