Policemen are the New Military 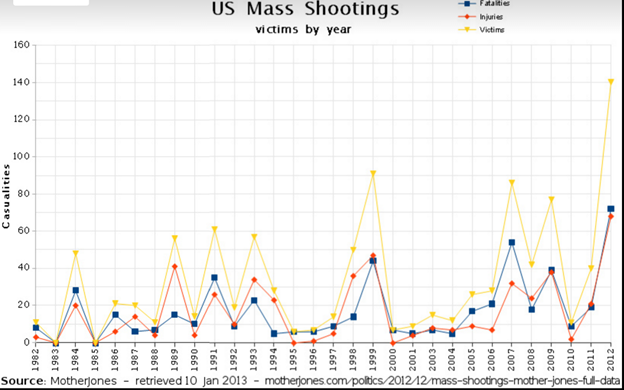 This chart shows that the U.S. has experienced a spike of victims of mass shootings since 2010.

As a result of the recent shootings and terrorism around the world, police forces are undergoing a tactical shift in their approach to this violence.

Policemen are typically the first to arrive at the scene of a shooting, and they are now expected to take on these terrorists wielding serious weapons. The policemen in major cities, like New York, have begun to practice drills with mock acts of terrorism, and there are suggestions of patrol cars being armed with assault rifles and other equipment for protection.

According to a recent article in The New York Times, during 9/11, hundreds of policemen, firefighters, and emergency medical workers died because too many rushed to the scene without proper direction or a clear plan. Now the policemen are doing drills to practice responding to the situation.

This subject is controversial, and has received mixed remarks. Police are now expected to act like the military, including the unexperienced and ordinary officers. The goal is to stop terrorism, and quickly respond to any acts of violence.

Chuck Wexler, an executive director of a law enforcement policy group called the Police Executive Research Forum, believes that this is too much to ask of police officers, and that their responsibilities have changed.

Williston sophomore Alana Serafino believes that this is part of the police’s job, despite the difficulties that they will face. She writes, “I think that it is a cop’s job to protect the people, and although it sucks for them, they know what they’re in for then they sign up for it. I feel bad for the police because that’s very scary, but it is part of the job.”

Police forces are changing their approach to counter-terrorism, and expecting normal police officers to be able to respond to armed gunmen.