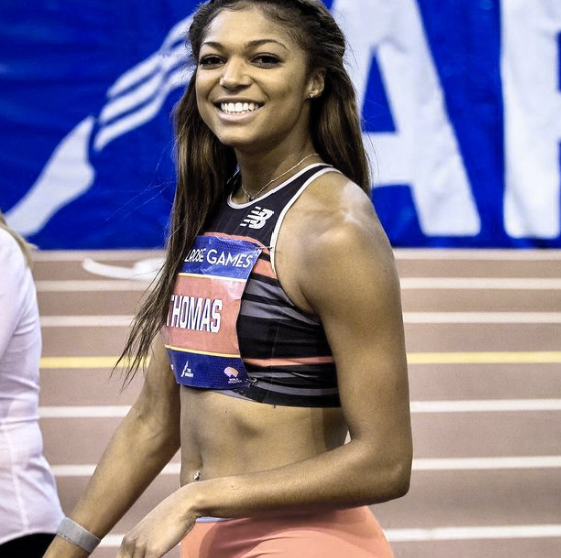 Two-time Olympic Medalist and Williston Alum Gabby Thomas ’15 will be back on the quad in late May.
Thomas, 25, will be returning to her alma mater on May 28 to give the Commencement speech for the class of 2022. Thomas was in the same seat seven years ago, at her own graduation.
But a lot has changed since then.
Thomas, a 2019 Harvard graduate, began to take her track and field career seriously in her junior year at Williston with coach Martha McCullagh. This began her journey to becoming an Olympic athlete. In the U.S. Olympic trials in June, 2021, Thomas ran the women’s 200-meter dash with an impressive time of 21.61 seconds, becoming the third fastest female to ever compete in that distance.
The only thing standing between her and a trip to Tokyo was a tumor found on her liver. Fortunately, the tumor was benign, and she was able to make the Olympic team. She won an individual bronze medal in the 200-meter final, as well as a team silver in the 4×100-meter relay in the Tokyo Summer Olympics, held from July to August, 2021.
Sue Michalski, a French teacher at Williston, is excited to welcome Thomas back to campus in her new role as a celebrated athlete.
“Gabby is the first speaker in my 20+ years at Williston whom I’ve taught and know well,” she said. “I had her in French 2H, 3H, and in a tight-knit AP French group. Gabby also babysat my children back in the day, so it feels particularly special that she’s the speaker at my daughter’s graduation.”
Head of School Robert Hill told The Willistonian that Thomas “has always been on my radar as a speaker, and I think I approached her when she turned pro as a runner, thinking she would really connect with the Class of 2022. And then she became an Olympic star and I thought: even better!”
Martha McCullagh, a Math Teacher, Cross Country coach, and Thomas’ Track & Field coach at Williston, is eager for Thomas’ speech.
McCullagh has stayed in touch with Thomas after being a huge part of her high school career. As a coach, teacher, mentor, and friend, McCullagh, who will retire from classroom teaching at the end of this year, can proudly say Thomas embodies Williston’s “purpose, passion, and integrity” credo.