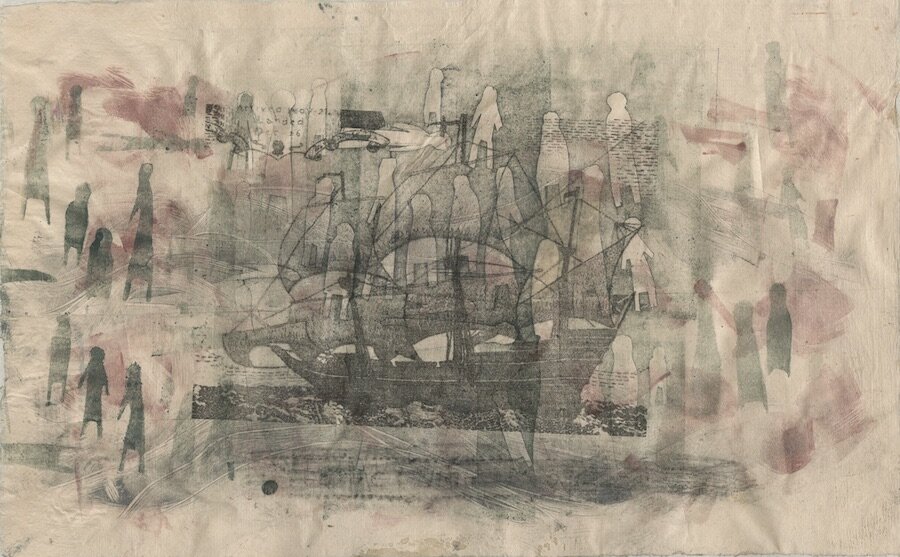 The Northampton Arts Council has sparked controversy by canceling its Biennial art show, after a piece in the show was objected to by a local resident who referred to it as “genocide art.”
This decision comes after Jason Montgomery, an artist and the Poet Laureate of Easthampton, objected to a print in the art show that depicted a large ship, with ghost-like figures meant to show Native Americans in the background. Montgomery, who identifies as half Native American, said that the piece “harmfully depicted Native Americans as ‘ghosts,’ perpetuating a myth that they no longer exist,” according to the Daily Hampshire Gazette.
Montgomery also raised questions regarding the selection process used by the Arts Council to determine which pieces of art would be in the show; he claimed the process disadvantaged Native Americans.
The piece in question, “400 Years Later No. 4,” was created by local artist and printmaker Doris Madsen. Madsen created the piece to depict the massacre of Native peoples by European colonists, and said she never intended to offend anyone.
“That is not what my work is about. It’s about the violence that Native People were subjected to,” she told the Gazette.
This controversy has sparked a larger debate in the community about what makes art “harmful,” as well as how art should be selected for a show. Some considered the cancellation of the Biennial a necessary step to ensure that the art selection process is fairer in the future, while others considered it a form of censorship.
While speaking with the Gazette, Stephen Petegorsky, a photographer and longtime Northampton native, stressed the importance of valuing free expression in art.
“Art is about expression, and the Arts Council should foster, protect, and promote expression,” Petegorsky said. “Instead, they’ve canceled an entire exhibit because of objections from one person about one piece of art.”
The Willistonian spoke with Jason Montgomery to discuss the cancelation of the Art Biennial and his concerns about its process.
Montgomery emphasized that the Biennial was not only canceled due to Doris Madsen’s piece, and that his main concerns were over the way the Arts Council selected art.
“Madsen’s piece was not the only reason that the show was cancelled,” Montgomery said. “The Biennial was canceled because it became very clear that there were numerous mistakes that were being made that limited access to [the Biennial] to the full breadth and scope of the community,” he explained.
Montgomery thinks that it is unfair for art to be selected through blind submission, a process in which art is selected without considering the ethnicity, gender, or age of the artist submitting the work. Until Montgomery and others raised questions about the process, this was the method used by the Northampton Arts Council to select art.
“You could say, ‘it’s a blind submission, couldn’t the art speak for itself?’ No, because the art speaking for itself does not recognize that there are huge power differences at work in our communities,” he said.
Ellen Augarten, a member of the Arts Council, was present at the Zoom meeting during which the decision was made to cancel the Biennial. The Willistonian watched a recording of the Zoom meeting on YouTube.
“I was always kind of proud that we had submissions that were blind,” Augarten said. “We were always concerned that the art should speak for itself and that that’s what the jury should focus on.”
Montgomery also believes that a blind submission would allow people who are not Native American to make decisions on behalf of the Native community.
“There are cultural and aesthetic choices that are made by folks who do not understand the culture and aesthetics that they’re drawing from,” he said. “That becomes problematic really quickly.”
Bill Clements, a Northampton resident, raised his concerns about censorship in an opinion piece submitted to the Gazette.
“Any constraints on what an artist can create and what an art consumer can see, hear, or read interrupt the free flow of ideas a democracy depends on,” Clement explained. “If art gatekeepers like the Northampton Arts Council will no longer allow a blind selection of works, what happens to freedom of expression? It’s something to think about.”
Montgomery dismissed any claims of censorship, mentioning that Doris Madsen still has the right to create art even if that art is not displayed in a show.
“Doris is free to show her work; her work was never censored,” Montgomery said. “I am not saying that she doesn’t have the right to move freely through this world, I am just saying that it isn’t an ethical place to be.”