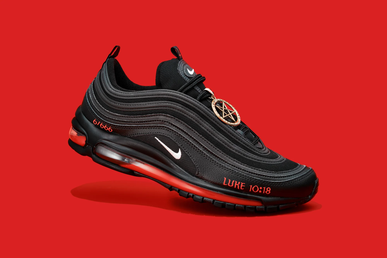 The release of Lil Nas X’s “Satan Shoes” has caught the entertainment industry by storm.
A rapper who rose to fame after his hit song “Old Town Road” in 2019, Lil Nas X in collaboration with MSCHF, a Brooklyn based art collective, released the “Satan Shoes” on March 29.
The “Satan Shoes” have a drop of real human blood in the sole of the shoe. They were released four days after a Lil Nas X video, “Montero (Call Me By Your Name),” which depicts the rapper sliding down a pole from heaven to hell then giving a satanic figure a lap dance.
All 666 pairs of the “Satan Shoes” sold out within minutes of their release on March 29. Each pair was $1018, referencing to the Bible passage, Luke 10:18, that says, “I saw Satan fall like lightning from heaven.”
Nike immediately cut ties with MSCHF. They sued the art collective for “trademark infringement and dilution, false designation of origin, and unfair competition” in order to distance themselves from the commotion, according to CBS News.
On April 9, MSCHF announced it had reached a settlement with Nike and would buy back any of the shoes for a full refund.
MSCHF has released a custom Nike Air Max 97 in the past: the “Jesus Shoes,” filled with holy water from the Jordan River.
Nikhil Sierros, a senior, feels the shoes are “more of a publicity stunt” than a personal statement.
“To me, these shoes feel much less genuine and more a cash grab for Lil Nas X and MSCHF by stirring up even more controversy when compared to something like ‘Montero,’ which had a meaningful, important message to send.”
Many on social media have spoken against the “Satan Shoes,” demanding a Nike boycott without knowing it is not an official pair from the brand.
JiHee Liu, a senior, says that he is not interested in the religious side of both shoes, but said the blood incorporated into the sole of the shoe “is very nasty.”
Nikhil has mixed feelings about the controversial shoe.
“I am Greek Orthodox and I do feel conflicted about the Satan shoes, considering I am a sneakerhead and a Christian,” he said. “To me, it feels disrespectful to be stepping on anything symbolic of God, and wearing any form of Satan on my body makes me feel very uneasy for obvious reasons. As much as I love sneakers, these shoes just cross a boundary for me I am not willing to cross.”
“I would not cop the shoes for myself in any scenario,” Nikhil concluded.
Matthew Moreno, a senior, agreed. “Neither shoe should not have been produced; religion should not be marketed or even depicted on a sneaker.”
MSCHF released a statement on April 1. “Last week’s release of the ‘Satan Shoes,’ in collaboration with Lil Nas X, was no different (than the Jesus Shoes). ‘Satan Shoes’ started a conversation, while also living natively in its space. It is art created for people to observe, speculate on, purchase, and own.”
Lil Nas X tweeted on April 1, “I haven’t been upset until today, I feel like it’s f***** up they have so much power they can get shoes cancelled. Freedom of expression gone out the window. But that’s gonna change soon.”
In compliance with Nike’s successful block of the sale of Lil Nas X’s shoes, MSCHF said, “Given the current circumstances, this action by Nike will also prohibit Lil Nas X’s Twitter giveaway for ‘Satan Shoes Edition 666’ from happening indefinitely.”