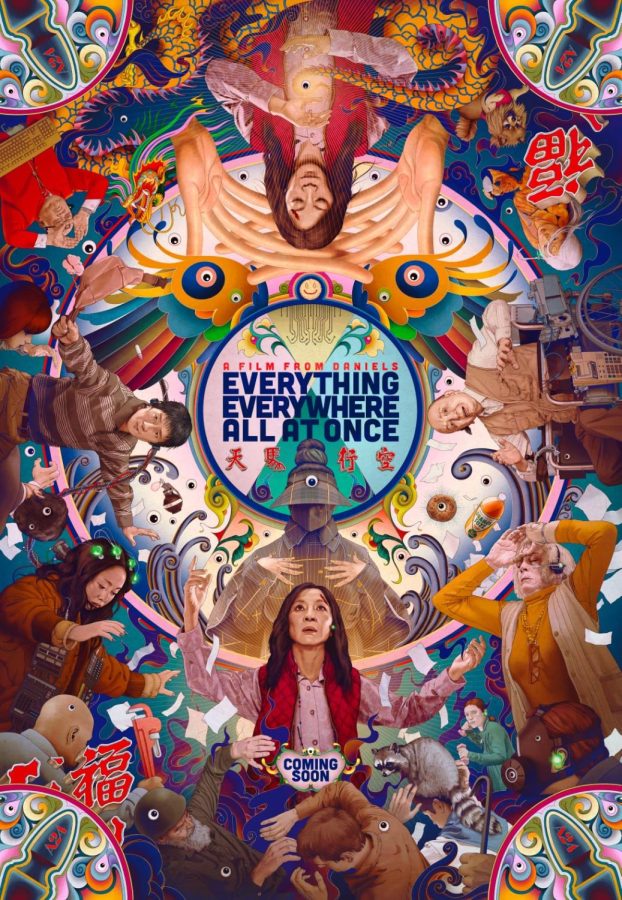 Independent film company A24 has entered the film industry with a boom.

A24, founded by Daniel Katz in 2012, is behind critically acclaimed films Midsommar, Moonlight, Lady Bird, and the hit HBO series Euphoria.

The public has recognized A24 for its unique style of cinematography with a distinct aesthetic, storyline, and overall content.

A24’s most recent comedy and science-fiction film Everything Everywhere All At Once, starring Michelle Yeoh and Jamie Lee Curtis, has been highly anticipated. Directed by The Daniels, Daniel Kwan and Daniel Scheinhart, Everything Everywhere All At Once tells the story of a Chinese American woman (Yeoh) struggling to pay her taxes. She later discovers she is an unexpected superhero battling the multiverse as different versions of herself.

The official trailer features Michelle Yeoh transforming into a chef, a celebrated actress, and a martial arts star.

Sarah Drucker, a senior from Great Barrington, Mass., recently watched Everything Everywhere All At Once.

“I thought that it was such a creative premise” she said. “It was done in a way where it was confusing, but not in a bad way. It was interesting and stood out. The acting and editing was amazing with the ‘trippy’ effects. I would definitely watch it again because A24 movies have so many hidden symbols within their movies.”

Sarah has always been a fan of A24, even before she watched this film.

“I really enjoy A24 movies because of the filming and how creative they are,” she said, adding that the “satisfying” and “trippy visuals” appeal to younger audiences.

In a 2018 New York Times article by Brooks Barnes, “The Little Movie Studio That Could”, Barnes comments on A24’s intentions and their place in the larger film industry.

“At A24, the talk is about artistic impulses first and foremost — how do we make a really cool movie — and then the studio tries to lean into whatever that may be in its marketing campaign, even if it’s weird” she said.

Adeline Hume, a senior planning to major in photography at Syracuse University this fall, thinks A24 movies like the new one stand out as pieces of artwork.

“Without words, the film is an artwork because of the way it’s filmed,” she explained. “A lot of production companies rely on the actors or the script, while A24 just does it with the aesthetic.”

Luke Richardson, President of the film club at Williston, is an immense fan of A24 as a company and because of their mission.

“So many indie films only play at arthouse theaters, of which there are only so many,” Luke said. “What A24 is doing is taking these smaller films and giving them big theatrical releases like Disney, Warner Bros, or Universal does. We’re talking 2,000-3,000 screens which is on the same level as other big movies. I think that’s really great.”

Luke said A24 is introducing something unique into an industry that can get stale.

“While people (including myself) love big action blockbusters, they get tired of that formula and they want something fresh, and that is exactly what A24 is doing,” Luke said.