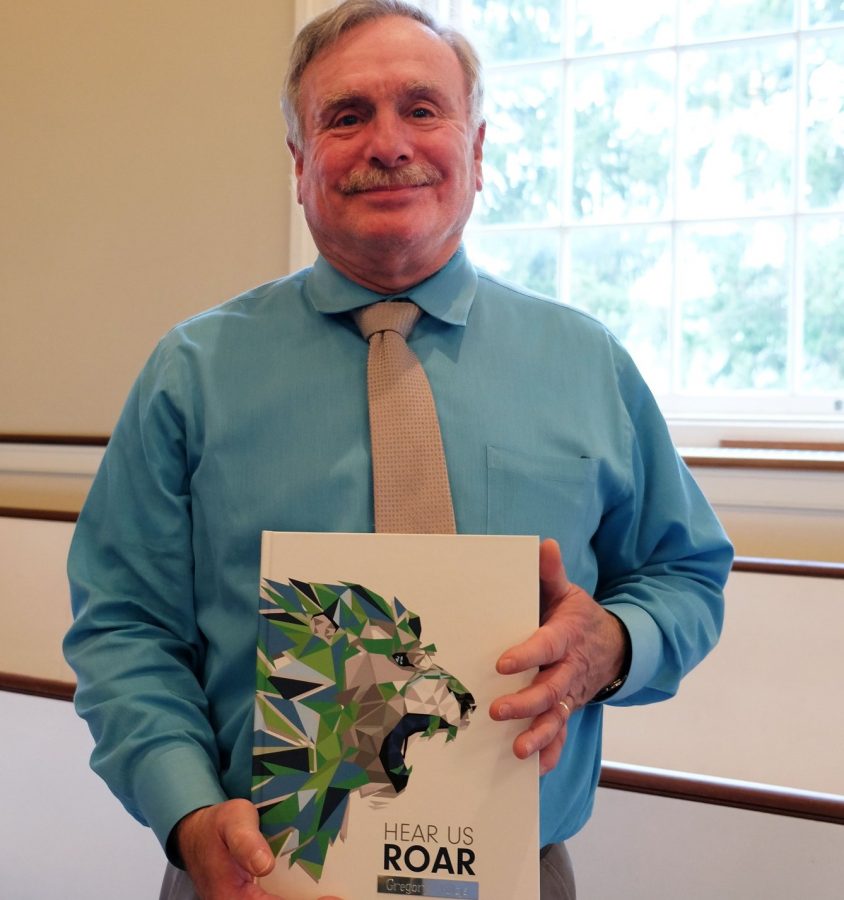 Nearly four decades in, Mr. Greg Tuleja is universally loved on campus, and that was clear when, in the final week’s all-school assembly, the editors of The Log formally dedicated the yearbook to the longtime, devoted Wildcat.

“Amazing,” Tuleja said of the honor. “One of the best things that has ever happened to me at Williston.”

Tuleja, who currently serves as Academic Dean as well as Cross Country coach, has been at Williston for 36 years. Back in 1986, in his third year on faculty, he was first honored with the dedication, which is a yearly tradition. (Last year’s recipient was Jenna Motyka.) The decision to recognize Tuleja was made by the four senior yearbook editors, Catherine King, Amanda Shen, Chelsea Clark , and Nhi Nguyen, as well as faculty advisor, Wendy Staples.

In the assembly, before his name was announced, the projector lit up with pictures of Tuleja throughout his life and career, from a young boy to more recent shots; as the crowd began to recognize who the pictures were, everyone began cheering. The  segment ended with a standing ovation.

“The thing was, when they showed my second or fourth grade picture up there, of course I recognized it, I knew who that person was,” said Tuleja laughing. “I think a lot of people at that point didn’t know it was me, they might have recognized me, [but] there is not much of a resemblance now.”

In their dedication, The Log editors spoke reverentially of Tuleja and his work for Williston.

“The words, ‘Purpose, Passion, and Integrity’ drive us to be the best students, athletes, artists, friends, and citizens that we can be,” the editors said. “We are inspired to be our best selves everyday because we are surrounded by role models that have affected our lives in different ways. This dedication is our gift to one of the role models that has forever changed the history of the school, and the lives of hundreds of students.

Tuleja told The Willistonian he was proud people had such nice words to say about him in the dedication.

“I felt good,” he said. “I knew pretty much when I first got here that this was going to be a place that I was going to stay for a long time. And it has just gotten to be a better and better job for me every year. I just love the kids here and it was an amazing, amazing honor.”

Nhi Nguyen said she and her fellow editors chose Tuleja because his impact on campus is so far reaching.

“I know that he has really impacted a lot of students on campus and they all have stories to tell about him,” Nhi said. “I believe that dedicating the yearbook to him would be a great chance to say thank you for giving to this community.”

“I think that Mr. Tuleja really deserved the yearbook dedication because of everything he does for Williston,” said Sonia Whitman ’21.

Looking back, Tuleja “doesn’t remember” much from the yearbook being dedicated to him in 1986. He was “young and new,” he said, and recalled himself to be a “fresh, new face on campus.”

“Now there is nothing fresh or new about me,” said Tuleja sarcastically.

Tuleja mentioned the yearbook being dedicated to him meant more to him this year than 1986 because of the current age gap between himself and the students. Since he doesn’t teach anymore, he doesn’t interact with as many students, he said, which makes it harder for him “to relate to teenagers” because “it is not as natural as it used to be.”  To be recognized by the students made him “shocked and overwhelmed.”

“But this is even more gratifying,” he added. “I am further away from the ages of the students and that means that they are seeing something in me that is worthy of praise. So that made me feel great.”

One special moment for Tuleja from the assembly was hearing Catherine King read a quote from his wife.

“To hear my wife’s quote was something special, I mean I am trying to be a good person, a good role model here at work,” Tuleja said. “But I am a regular old person when I go home, and to have her say those things about me was really nice.”

Tuleja felt a deep connection with the class of 2019.

“I feel really close to this senior class,” he explained. “I mean I have had advisees in this class for years, seven of my eight advisees are seniors.”

Anna Richardson ’21, a future captain of the Cross-Country team, looks up to Tuleja as a motivating coach.

“I think he is a really deserving person,” she said. “He is a such a great coach, and I feel like he has a genuine care for the students and for his athletes. He tries really hard to make connections with the students and I think the students really appreciate that.”

Adding on to Anna, Abigail Touhey ’22, has been coached by Tuleja from seventh grade.

“I think [the yearbook dedication] was good,” she said, “because he has given so much for the school over his years and he’s been a really big impact and influence on students’ lives.”