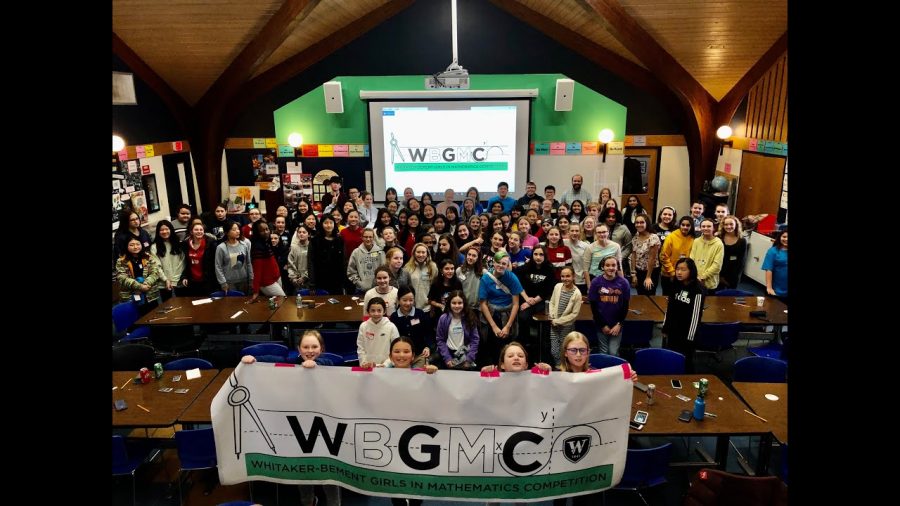 Williston held its first ever girls only math competition in Whitaker-Bement, home of the Williston Middle School, on January 19th. The event was a milestone for advancing the opportunities for girls in STEM fields.

The Williston Math team coordinated the event on a Sunday morning, beginning the registration before 8 a.m. and finishing around 3:30 p.m. The math department and student volunteers from Williston had their work cut out for them with various jobs like, scoring, proctoring, and timing.

Joshua Seamon, Head of the Math Department, played a crucial role in bringing the event together, from advertising  to overseeing the participants. He showcased his determination and love for math, alongside many of his math colleagues including Teddy Schaffer, Karla Schaffer, Kathryn Hill, and Mimi King.

Seamon’s main goal was to promote more girls to be interested in math because the fields of STEM (science, technology, engineering, math) tend to be male-dominated.

“There are many reasons, but I believe it comes down to two big reasons: culture and stereotypes,” Seamon explained in an email. “For a very, very long time, continuing even to today in some spaces, boys are told they are good at mathematics and girls and non-binary individuals are told they are not. It’s acceptable for boys to be good at math. It’s not acceptable for girls and non-binary students to be good at math.” Seamon elaborated, “Boys are encouraged and supported in their quest to be successful at math, while others are not.”

Isabel Baxter-Paris ’25, attended her first ever math competition. During the interview she showcased her passion towards the STEM fields and her desire for more girls to be encouraged to pursue their passions in math and science.

“I am very interest in STEM and computer programming,” Isabel, who is also in the Robotics club, stated. “Especially in my elementary school, I was usually the only girl who was involved in those things. So I think this is a really great event, and it is really working.”

Isabel liked the team round because it gave her a chance to collaborate with her friends to solve math problems. She referred to her experience as both “hard” and “fun.” Which is what most math teachers would like to hear.

She also shared the psychological reasoning behind how girls believe that they cannot be better at math than boys.

“They feel like they can’t do it, and then boys are usually the dominant gender so they just think that they are not going to be able to do it,” she said.

Dakotah Thomas, a 12-year-old from Wilbraham & Monson Academy who is currently in sixth grade enjoyed her experience. Andrea Xu, another 12-year-old also from Wilbraham & Monson Academy in seventh grade, likes algebra. Her day was packed with team work and the individual round, followed by a guest speaker discussion on computer science, where she learned about coding.

Addy Barr, in seventh grade, lives in Easthampton and goes to White Brook Middle School. She liked how she got to bond with her friends during the event.

“I think it is true, I mean that a lot of the time my mom told me that a lot of girls end up thinking that math isn’t a cool thing to like,” said Abby. “And so they are like, well I want to be cool. So I am not going to like math anymore.”

Braelyn Willett, like Abby, is from Easthampton and goes to White Brook. For Braelyn it was her math teacher that taught her to enjoy math, eventually leading her to do the competition with her friends.

“My favorite part is being able to be with my friends, and having the experience,” she said. “Even though some of the math problems I might not know, I still get the experience to solve them.”

Seamon stressed how important it is for Williston as a community to motivate girls to be interested in math, stressing how everyone should encourage girls to “follow their bliss, wherever it leads,” and “by giving our students hard things to do and holding them to high standards.” Also important, Seamon said, is the need to “[show] kids cool stuff and [get] out of the way.”

Sophie Calderon ’21, reviewed questions for the competition and evaluated them based on their difficulty level.

“It was really cool proctoring their rooms especially on the team rounds, because watching all the girls in each team collaborate and come up with different answers was really inspiring,” said Sophie. “And I could see they were having a lot of fun together.”

Abby Belfer, another junior, volunteered for the event to grade answer sheets in the individual round and something called the “Guts” round. In this round, teams compete to answer the most questions in an hour, and scoring is shown live on a board.

“I thought it was cool to see middle schoolers from all over working so hard and being so interested in math,” stated Abby. “It was inspiring to see so many young girls with such an interest in competing.”

Teddy Schaffer, a math teacher, commended the Williston students for their dedication and hard work to make the event happen.

“My favorite part of the math competition was watching the Williston students take the lead on making it happen. Students wrote over 80 problems over varying levels of difficulty,” Schaffer stated in an email. “Students tracked down potential schools and teachers to advertise the event. Students made videos, hosted the event, and spent a lot of time and effort to make an awesome event for girls that they had never met before.”

He went on to add, “I think that’s an awesome example of how great our students are here at Williston when they apply themselves to something they are passionate about.”

Steven Wang ’20, was one of the students behind the creation of the event. He was very thrilled with the number of participants, and hopes the event will be a success every year.

“I’m really thrilled to see the girls finding things to be passionate about and enjoying themselves, especially in math,” said Steven. “I’m also glad that we were able to contribute to their math experience through organizing this competition. I really hope (and believe) that WBGMC will get better each year!”