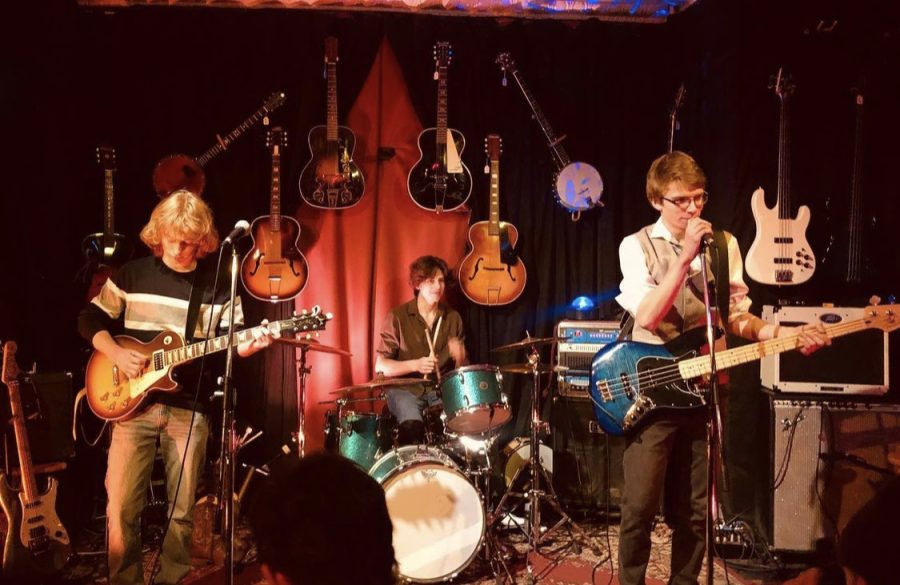 A promising up-and-coming band, The 413s, made their debut in a gig at Luthiers Co-op on Saturday, December 4.

Getting their name from the area code of their birthplace, the Pioneer Valley in Massachusetts, the 413s are made up of three aspiring rock stars, Dylan Nicolle (guitarist) and brothers Liam (drummer) and Daniel (lead singer and bassist) McKellick. Covering famous rock acts from Dire Straits to Harry Styles, the 413s certainly proved that they are not just any old high school garage band.

Along with being full time students, the 413s started a rock and roll band to fulfill the McKellick brothers’ father’s dream.

Liam is a junior at Gateway Regional High School. Daniel and Dylan are freshmen at Western New England University, and Holyoke Community College, respectively. They all live in Montgomery, Mass.

“This is our opportunity to make a name for ourselves,” the 413s said. “We have the same dream but they [father’s band] weren’t able to accomplish it so it might as well be us.”

The 413s have played for small gatherings of people, but ultimately decided to take it to the next level after watching other small bands preform at Luthier’s.

“We started going to Luthier’s a couple years ago, maybe three years ago, it was really where we fell in love with small live music,” the 413s said. “We would be there literally every week before Covid hit. That’s what made us want to really start playing actual places.”

Soaryn Rutherford, a senior boarder from Nantucket Mass., thought the aesthetic environment Luthier’s Co-op added to the overall allure of The 413s.

“I thought it was like really cool and it matched their feel,” she said. “The whole vibe in it really added to the whole experience.

It was clear that the 413s were well received on the night of their show; people were up dancing in front of the stage, singing along, and cheering loudly.

“Everyone was so into it and so supportive,” she said. “It was pretty insane, everyone cheered them on and thought they did a great job.”

The 413s played mostly rock and roll classics at their show, luring many pedestrians in to listen.

“People walking in off the street saying they heard us and they liked the sound of the good old fashion rock and roll, it really drew them in,” the 413s said. “And that was something that we’re pretty proud of, it meant something to us because you know they noticed us, they liked what we sounded like, and for a bunch of kids from the middle of nowhere, that’s pretty cool.”

More than just covers of the greats, the 413s have also branched out into music composition, playing two original songs at their show, “One and Only” and “Jazz Deluxe.”

They plan to produce these songs and get them out on streaming platforms in about six months. Right now, the only way to hear their music is through clips on the band’s Instagram (@the.413s).

“Our plan is to have it on Spotify,” Daniel said. “As a group we’re going to try to get together and make a good sound together that we’re proud of as a group, something that we want to represent us.”

They also played their own renditions of famous classics, most notably “Jumpin’ Jack Flash” by The Rolling Stones, “Keep Your Hands to Yourself” by The Georgia Satellites, and “Are Your Gonna Be My Girl” by Jet.

Working on new music and agreeing on what the 413s should play is a big challenge in their group.

Though no members are pursuing music through higher education, they believe that experience is the best learning they can do.

“I learn more when I spend the time with Daniel and I play the songs and I play different places and I think I’m learning a lot more this way than I would like that,” drummer for the 413s, Liam, says.

Abby Vassallo, a senior at Williston and girlfriend of Dan McKellick, believes in the band’s star potential especially after their packed show.

“I truthfully think they have a lot of talent and I truly think that if they wanted to stick with it they could totally go somewhere,” she said. “I think their music appeals to a lot of audiences. They play well and work well together.”

Though the band is only just starting to really pursue their musical careers together, they say that no matter where they go or what the status of the band is, it will always be with them.

“Rock and roll lives forever through us,” the 413s said.

The 413s have their second show scheduled for February 26 at Luthiers.