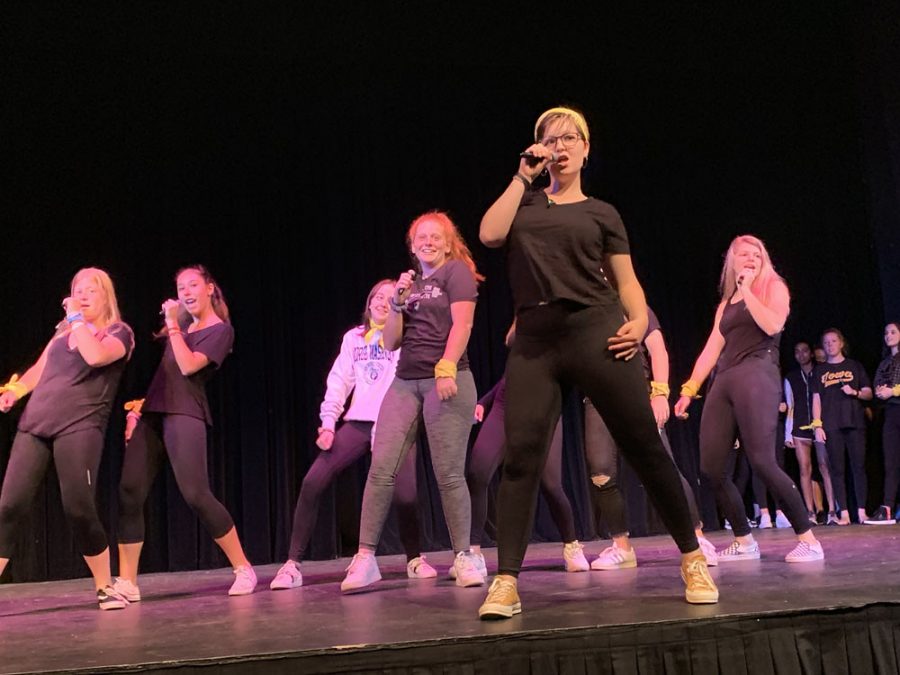 Williston had its highly-anticipated annual lip sync competition for the Willympics on September 27. John Wright blew the crowd away with their performance of “A Thousand Miles,” by Vanessa Carlton, while Mem West gave a fantastic remake of the “Pitch Perfect 2” finale.

Lip sync battle originated from the show on Paramount Network hosted by LL Cool J and Chrissy Teigen. It features all different kinds of celebrities doing a choreographed dance while lip syncing famous songs. The judges for the Williston battle were John Chiavaroli, Emily Ditkovski, David Koritkoski, and Monique Conroy.

194 was the reigning champion of the lip sync battle, and every year they show up prepared, and give fantastic performances. However, all the dorms showed up ready this time, especially Mem West and JW.

194 ended up taking third place, while JW took second, and Mem West was first. The lip sync resulted in a tie between JW and Mem West for the overall Willympics top spot. There will be another competition, date still yet to be determined, to crown the final Willympics winner.

Kate McDermott ’21, said that the lip sync this year was the most memorable one. “I think that having more time allowed everyone to prepare more,” Kate, from Duxbury, Mass, and a proctor from 194, said. “Overall, every dorm had a good song and a good skit.”

She also found the humor and comments of the judges funny and entertaining. Even though it was a competition, the audience was able to support all the groups while they were performing.

Kate said, “I liked how when people were performing the audience was clapping and shining their flashlights.” She mentioned the day student group’s performance of “All of Me” by John Legend. “I think the day student one was the most memorable because it was performed by a really small group. But everyone’s flashlights were on and everyone was singing along.”

Allison Marsland, Dorm Head of 194 Main, and Director of Middle School Admissions, said that the bar was raised high this year. “Many dorms put their heart and soul into it, and I was so proud of 194 with essentially a 100% participation,” she said.

“[We were] funny, poignant, entertaining, and had an outstanding use of props,” she said.

Marsland agreed with Kate about the supportive nature of everyone in the audience. “Overall, I think all the dorms were really supportive of each other, it was fun to be a part of the energy and that audience,” she said.

She is already looking forward to the lip sync next year and is prepared to win back the championship title. “One of the lessons that I took from watching the performances from the winning teams was that it helps if you focus the attention on the lead vocals, and not get distracted by the backup singers and dancers,” she said.

She credits JW and Mem West for doing that very well. “You knew where to look and where to focus your attention. 194 had a lot going on, and you couldn’t always figure out where your eye should be, which hurt us in the end.”

Erin Davey, Assistant Dean of Students and Dorm Head of Mem West, loved the attendance and the energy everyone brought this year. “It was awesome and so well attended. The energy was at an all time high and the competitive level was fiercer,” she said.

Mem West went all out this year and everyone was very committed. Davey credited three girls: seniors Trang Phan, Jade Chan, and Nina Renkert, for organizing the whole choreography. “They taught everyone the dance and made sure everyone was involved,” Davey, who also serves as Williston’s Director of Inclusion and Community Life, said. “The lip sync wouldn’t have happened without the help of the three of them.”

Davey had a lot of fun, she said, including singing “Happy Birthday” to Ryan Hanford, English teacher Mr. Hanford’s son.

Kaitaro Hori, a sophomore from Tokyo, Japan, and a resident of JW, practiced a lot and put in a lot of effort. “It was fun because we have never placed in top three before,” Kai said. “However, JW should have won.”