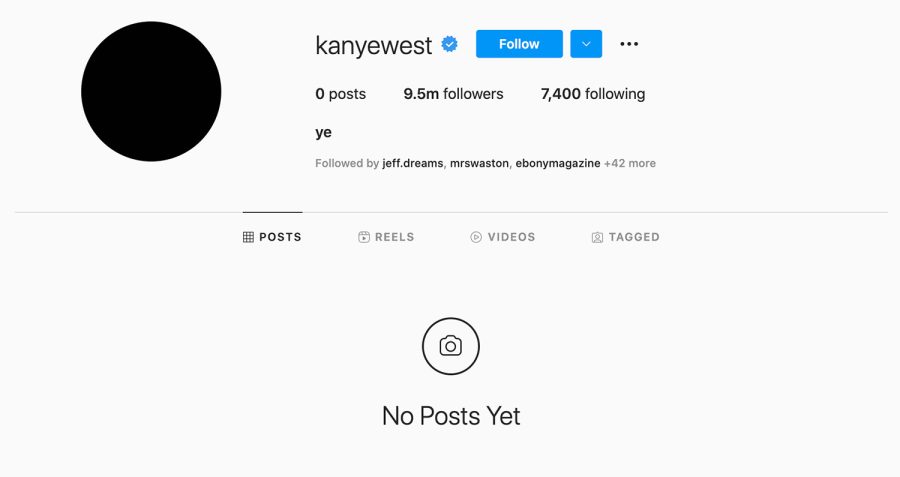 Ye, the artist formerly known as Kanye West, has been banned from performing at the Grammys for troubling online behavior, as well as for racially insulting this year’s host, Trevor Noah.

West is nominated for five awards following his recent album release, Donda, and has to date earned 22 previous Grammy awards. The Recording Academy has prohibited West from performing at the 64th Annual awards ceremony on April 3, 2022, due to his public racial harassment of Noah and online harassment regarding ex-wife, Kim Kardashian.

According to NPR, the Recording Academy is prohibiting West from performing at the award show due to his “concerning online behavior,” which was confirmed by a spokesperson for West.

On August 29, 2021, West released his 10th studio album Donda. Upon releasing Donda, it was made public that West and former wife Kim Kardashian had broken up. After the release of the album, the two announced their divorce. West took to social media to criticize Kardashian, posting private text conversations, bashing her, and attacking her parenting skills. After posting a racial slur directed at Noah, West was suspended from Instagram for 24 hours on March 16.

One of West’s public attacks on Kardashian was regarding their oldest daughter, North West, posting videos on the social media platform TikTok. West told his followers on Instagram that he had called Kardashian and told her to stop “antagonizing” him by letting North post lip-syncing videos.

Kim Kardashian responded by posting a statement on her Instagram story.

“Kanye’s constant attacks on me in interviews and on social media is actually more hurtful than any TikTok North might create,” she said. “Divorce is difficult enough on our children and Kanye’s obsession with trying to control and manipulate our situation so negatively and publicly is only causing further pain for all.”

Kim also noted that she is the primary provider and caregiver for their children. She is cautious with North’s protection online, while allowing her to express her creativity.

Kai Hori, 19, a boarding senior from Tokyo, Japan, considers himself a fan of the rapper.

“I don’t think he should be banned because I think his performance should have nothing to do with his issues in real life,” he said. “I think he would put on a very entertaining and a great performance that people would enjoy. He is an artist, and this is an award show for artists. He should still be able to perform regardless of what is happening.”

Tabitha Randlett, 18, from San Francisco, is also a fan but agrees that the Grammys did the right thing.

“Ye’s divorce should have been handled in private and he should have gone to other measures before taking it to social media,” she said. “He is 100% in trouble and needs to seek help before taking his problems to Instagram again. I think it was within the Grammys rights to ban him from performing and they did the right thing.”