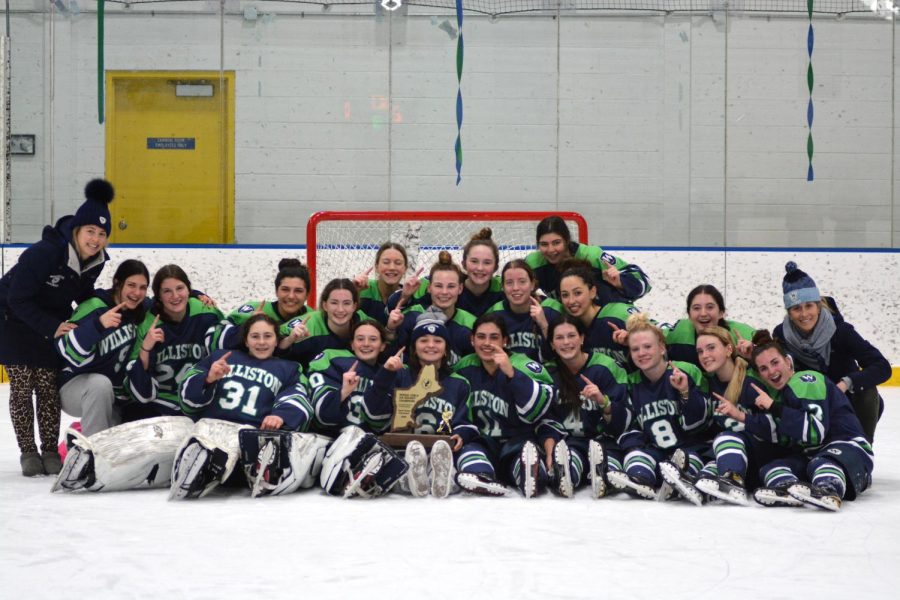 After years of competing for the NEPSAC championship, the Girls Varsity Hockey team won the title for the first time in the school’s history on March 6, 2022, beating Nobles 2-0. The team finished 24-1 on the season, breaking the school record for number of wins in a season.

In the 2017-2018 season, the team came closest to winning the title by going to the championship and playing rivals Nobles, but ended up losing 2-0. From there, the team went back to work and in the 2019-2020 season set the school record for wins at 22. Still not satisfied, the team, led by coaches Christa Talbot-Syfu and Alex Tancrell-Fontaine, found a way to overcome adversity and not only win NESPAC but set another school record for wins, at 24.

Natalie Stott, a senior goalie and MVP of the tournament, was proud of her team.

“I have never been on a team that has loved each other so much, and winning the championship proved to each other how deep our love ran,” she said. “I think we have a bond that not everybody can truly understand unless they have felt it for themselves.”

Violet Carrol, a freshman on the team, played in her first post-season appearance with the team. She was anxious going into the championship game.

“Going into this game, I was filled with excitement, but my stomach had butterflies all around. The night before I was still trying to process that I was playing in the NEPSAC championship against Nobles as only a freshman,” she said. “I was very nervous; I never in a million years thought that I would be playing in this game. I anticipated the energy and intensity of the building and both teams.”

After Maeve Reynolds scored 29 seconds into the game on a pass from Monique Lyons, the Wildcats kept rolling. Jules Constantinople, senior, later sealed the deal with her goal in the middle of the third. Natalie stayed solid the whole game, which ended with her 10th shutout of the season.

Grace Bean, senior boarder, came to the game while on break.

“The entire rink was electric,” she said. “All of the local day students and a surprising number of boarders stayed for the games and were super loud and involved in the game, more than I’d ever seen.”

Talbot-Syfu, coach of the team for the past 19 years, thanked her strong senior squad, and noted the excitement of her players just to be on the ice after a pandemic-interrupted season.

“I knew this was a special group given our group of seniors,” she said. “Given Covid, this group was extremely grateful to be able to play every day and didn’t let the circumstances change their efforts or goals.”

She added, “As we finished January and approached the final month of the season, we talked a lot about building momentum, getting on the score board first, and playing better team defense. This put us in a good position as we finished the regular season and headed into playoffs.”