Ford vs. Mem: Round One 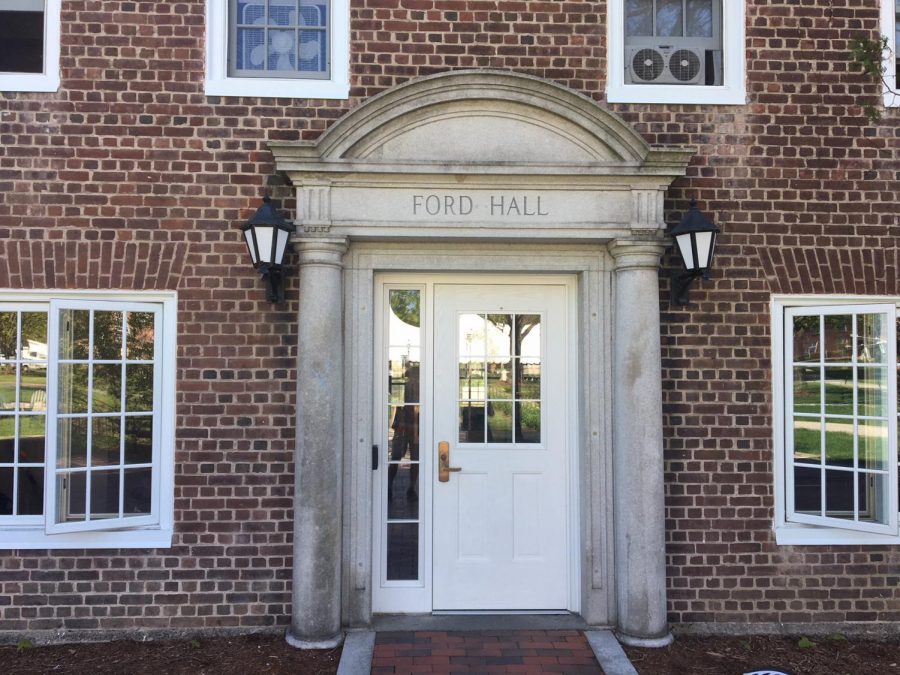 A yearlong battle between Ford Hall and Mem West is officially underway.
On Tuesday Sept. 30, Ford Hall was challenged by Memorial West to a year-long competition on Blue Friday nights, which consists of a different game each week.
“We thought it would be fun to do an activity with Ford Hall, the two oldest boys dorm on campus,” Avi Kacker, proctor in Memorial West, said.
At 9:30 p.m., Friday October 1, Ford Hall headed over to Reed Center to play in a Spikeball competition against their rival. The event consisted of three separate games played simultaneously. Every dorm could bring a maximum of six people, competing in a two vs. two games. The winner was established by a best out of three game showdown: Ford Hall took the victory over Mem West 2-1.
Both dorms showed up with supportive fans to cheer on their dormmates. Music was played while the 12 players were running the show, and the atmosphere was competitive.
Ford proctor Will Gaca ’22, was excited and enthusiastic about his home’s win.
“It still turned out pretty good. I thought everyone was excited to be there,” Will, from Durham, N.C., said. “It was competitive. A lot of energy. Ford Hall won, obviously.”
Will was able to give The Willistonian a small spoiler about what is probably coming up next: “I’ve heard volleyball is floating around, so that might be something. I’m looking forward to other competitions later.”
James O’Toole, a post-graduate living on the first floor of Ford, spoke to The Willistonian about his performance last Friday. James was happy about the competition level, but not too pleased with the location.
“In my opinion it should have been outside because the ball kept going out of bounds, we had to run upstairs to get it, come back down and play.” James, from Rockland, Mass., said. “There wasn’t a lot of room when the ball bounced really far.”
James is looking forward to the next competition. “I think it’s going to be a lot better,” James stated. “In volleyball you can have six people playing. So there will be more people included from the dorms and there will be a better atmosphere.”
Avi gave The Willistonian some insight on the logistics of the competition.
“We all met with our dorm head, for us Mr. [Teddy] Schaffer,” Avi said. “I actually had the idea to have it on Blue Fridays, because people tend to not have too much work.”
The Memorial proctor from New York stated that a major concern on his hand was the ratio of people playing and watching. “Obviously Spikeball is a fun game but it’s kind of hard if you’re not playing to be as involved as you want to be.”
Memorial West residents left the first round of the competition with a bitter taste in their mouth, but Avi asserted that big wins are coming up for the boys in his dorm.
“Volleyball is something that I feel very confident in my abilities at, and in addition, we have a bunch of tall guys and athletic guys,” Avi said. “I don’t know if Ford can keep up. I think we’re taking that one for sure.”