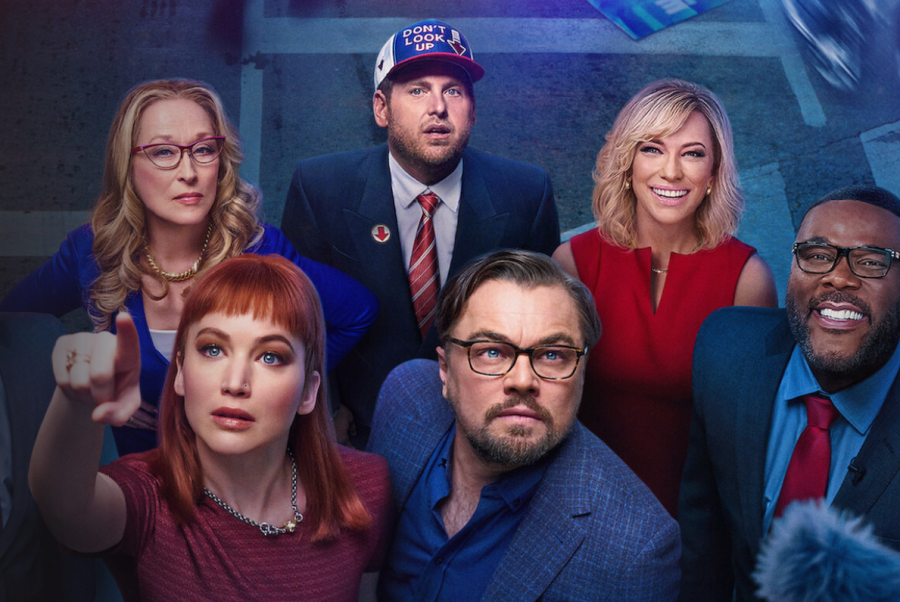 A star studded cast and an abundance of humor are some of the main attractions to new feature film “Don’t Look Up,” however, why the movie is so important may be a little darker.

“Don’t Look Up,” released in December of 2021, has been nominated for four Oscars, including Best Picture, Best Original Score, Best Original Screenplay and Best Film Editing. The movie features two scientists who discover an asteroid coming straight towards Earth, and their journey to inform the world about it. Although done through humor, the underlying deeper message is much darker, exposing the dangers of major cooperations and leaders with little experience along with the dangers of global warming. “Don’t Look Up” addresses the wake-up call we cannot ignore, and then shows how funny — and scary — it is when everyone ignores it.

“There’s an alchemy to the cast of ‘Don’t Look Up’ that feels fresher and stranger than it might have been in less-skilled hands,” DiCaprio, who plays scientist Randall Mindy, who discovers the deadly asteroid, said in a January Vanity Fair article.

“Don’t Look Up” uses this impressive and hilarious cast to get across the point that the world is far too distracted with things that don’t matter to realize the problems that exist in our world.

Throughout the movie the two scientists struggle to make leaders, and the public, take the impending doom their world is facing due to the asteroid seriously. The asteroid is ignored by the government and scientists, and even gets turned into a political weapon.

Different political parties coin the term “don’t look up” in order to politicize the asteroid. Aided by humor, it appears ridiculous. How could something so obvious be so overlooked, or even mocked?  However it is hard to ignore the countless possibilities that the asteroid could represent. The one that immediately came into my mind, was climate change.

Like the asteroid climate change is here but often understated, ignored, or downright denied by those in charge. It is hard to see the potentially deadly effects of something that doesn’t directly affect you, as the movie makes clear.

According to Time, former President Trump, dubbed climate change a “hoax” invented by China, “incorrectly suggested that wind turbines cause cancer, and dismissed a landmark scientific report produced by the federal government’s own scientists.” His actions in preventing climate change were all too similar to those of the president in the movie, played by Streep: ignore it.

Other viewers may have seen the asteroid as a commentary on the ongoing Covid pandemic. Wendy Staples, an art teacher and fan of the movie, thinks the movie “is a direct commentary on political views and Covid. I think the whole idea of the comet is Covid. If we don’t think about it or look at it then it doesn’t exist. But, if we start testing and we acknowledge it then it becomes real, and people have fear, and they want to avoid that fear so they ignore the problem all together.”

Staples feels the movie is so successful because it could be a satire of our Covid response, or be about other typically liberal-learning issues like sustainability and environmental protection.

“There are a lot of bad things going on behind the scenes that people just ignore,” she said. “I think the movie really shows how detrimental this can be.