Do Athletes Have to Ignore Booing Fans? 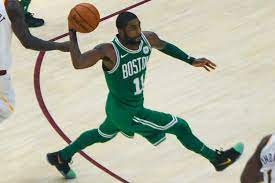 The arrogance of professional athletes can lead them to fall for provocations from their fans and haters. This has broken out into a controversy of whether pro athletes should or should not interact with their fans during games.
In the past year, disputes between athletes and fans have increased and raised a moral question of whether athletes, like Kyrie Irving, should be sanctioned for this on-the-court misbehavior.
Irving, point guard for the Brooklyn Nets, has been accused several times of misconduct, in particular after showing the middle finger to fans sitting near the court in Game 1 of the playoffs against the Boston Celtics (his previous team). The TD Garden had been Irving’s home for two years, and coming back there playing for the Nets made him an easy target of comments and public denigration.
Christopher Tanguay, dorm parent in Ford and Celtics fan, shared with The Willistonian his thoughts on the incident involving Irving and the fans at the TD Garden.
Tanguay believes that maintaining integrity in the game needs to be the priority for athletes; fans should be considered an outside factor, he said, but not the ultimate focus.
“I think that as a professional athlete, one of the responsibilities is to be a role model, and it is never okay to make obscene gestures to a crowd of people,” he said. “It is Kyrie’s responsibility to make sure he can focus on the game he is paid to play, and not the surrounding environment.”
Tanguay addressed the particular factors that led to Irvin’s harassment, and recognized that a line should be drawn for fans in the way they talk to athletes from the stands.
“Part of home field or home court advantage is the role the fans play and the impact they have on the game,” Tanguay explained. “There is definitely a line that fans cross. Personal threats made to players, throwing things on the field, and entering the field of play are all unacceptable.”
In an April 17, 2022 article in the New York Times, Scott Cacciola reported Irving’s words in the post-game news conference after Game 1 of the playoffs.
“The energy they have for me, I’m going to have the same energy for them,” Irving said. “There’s only so much you take as a competitor. We’re the ones expected to be docile and humble and take a humble approach. Nah.”
Mark Conroy, Athletic Director, explained that sporting events should be supportive environments. Sometimes there will be criticism from the fans, he said, but it should be within the boundaries of respect and thoughtfulness.
“I think that attending a sporting event does not give spectators a license to demean or disrespect student athletes competing,” Conroy said. “I still think there is a fine line when fans are expressing their displeasure. Booing is one thing, but comments that attack the person and not the performance in my opinion are unfortunate.”
Conroy emphasized his expectations that the Williston community has in regards of hosting sporting events on campus. He explained that the goal is to engage in games on the field while showing respect to one another.
“The culture of our community is embedded in principles of respect for self and others,” Conroy continued. “Athletics are hard fought and emotional, so in order to be a great competitor, athletics teach us how to compete with poise and respect for our opponents.”
All over the sports world, these instances are rapidly spreading, but there might be a psychological explanation to it that we don’t take into account.
Tyla Taylor, AP Psychology teacher, shared with The Willistonian some insights about athletes and fans’ minds, and the toll that the current game situation can take on them.
Taylor elucidated the frustration-aggression principle, often happening in athletes, as well as the phenomenon of deindividuation, which occurs instead on the fans’ side.
“In psychology, there is something called the frustration-aggression principle […], their [the players’] frustration turns to anger, which leads to aggressive verbal outbursts, and unfortunately these are often on the biggest stages and caught on camera and put on the internet forever,” Taylor explained.
Taylor addressed the fans’ aspect of the controversy.
“However, sometimes heckling can turn into abuse, and that should never be tolerated,” she said. “There is a social psychological phenomenon called deindividuation, where there is a loss of self-awareness and restraint in group situations.”
Taylor spoke about the leadership aspect of the game, which puts star players under a harsh spotlight.
“Sometimes the leader is the most talented player, and is therefore the most praised and most villainized as well,” Taylor said.
“[The involvement of captains in these situations] could be a way of protecting their own ego and individualism as a player, or also standing up for their teammates,” she said. “That distinction is very dependent on the player and his personality.”