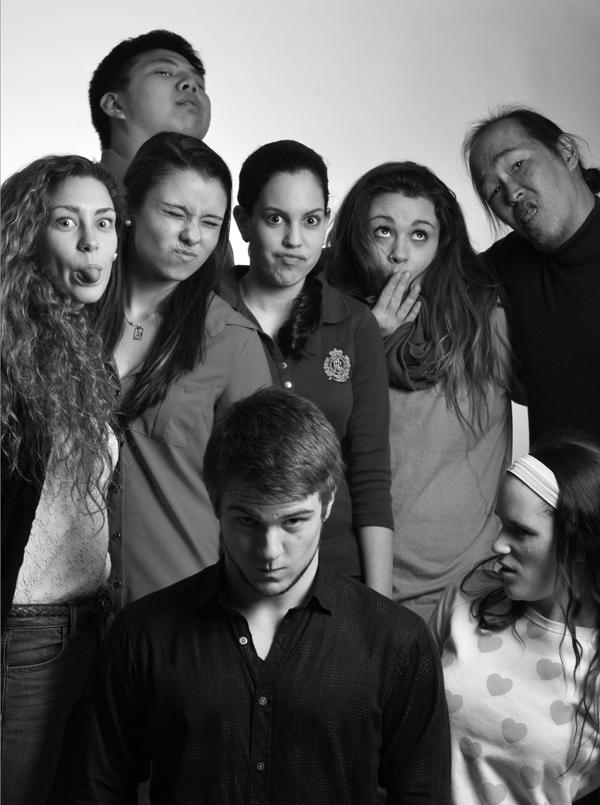 Every year, the Williston Photography Department organizes and executes a series of portraits showcasing diversity at Williston. The following are the final portraits from the project, which are also on display in the Reed Center for your viewing pleasure.

Every year, the Williston Photography Department’s finest gather together to capture Williston’s cultural diversity in its myriad forms. At the end of each Diversity Conference, more than fifty portraits appear on the walls of the Reed Center. This is how they get there.

It’s organized chaos, at its most basic level. At our peak there were between thirty and forty people crammed into a space designed for fifteen, sharing the digital lab with a well-stocked workshop that discussed the façades and contructs of the fashion world while we airbrushed out blemishes and pimples en masse. The hallway leading to the studio was packed with eager students waiting for their fifteen minutes of fame. From outside  the thumping beat of another workshop’s hip-hop demonstration could be heard. When all was said and done, Mr. Hing, Williston’s veteran photography teacher, said simply: “today was an easy day.”

The nine of us started promptly at 0900 hours, an hour later than planned due to administrative intervention. Within fifteen minutes the first of our subjects arrived, and we were on. The process itself is fairly simple: greet the subjects, have them respond to the question of the day, send them into the studio to be photographed, then to the back for a video interview, to the front to sign a permission slip, and then back out into the world, ad infinitum.

Everything is decided by way of committee. About a week ahead of time, we gather in the photo lab to select the majority of our subjects, create our question, and assign jobs for each of our members. This year, we settled on “Who are you,” a much better question than the typical “what does diversity mean to you?”

However, even the best of planning fails to account for the sheer business and necessary efficiency during the event itself. Everyone ends up doing everything, within reason. The editors becomes photographers and vice versa; even the free agents and greeters rise to fill any needed roles. There is little room for ego, as individuals’ selections for subjects to photograph gives way to who is available to shoot when they arrive. Together, we somehow manage to function as a well-oiled machine.

Many students, both in and outside the lab, repeatedly express their jealousy of the crew. It often goes like this: “Oh, you’re all so lucky; you just get to hang out in the photo lab all day doing your workshop and ordering in pizza.” These individuals fail to realize that our workshop goes roughly seven hours longer than any other.

We start before and end far after Diversity Day itself, not to mention the specific time allowed for workshops. In short, the Diversity Conference Photography Project is not for the faint of heart.

When all is said and done, when we slump in our chairs around flat cups of Coca-Cola and remnants of Antonio’s pizza, gazing at the last of the portraits still on the wall, the lab is filled with a sense of weary satisfaction. To create a large, high-quality body of work in one day, from start to finish, makes the entire process well worth it. It’s an insanity that some of us are drawn to, time and time again. This year, we had two juniors and seven seniors on the crew. As we move on to college and beyond, we pass the torch and bask in the glory of a day well-spent.