Connor Mooney to Step Down as Lax Coach 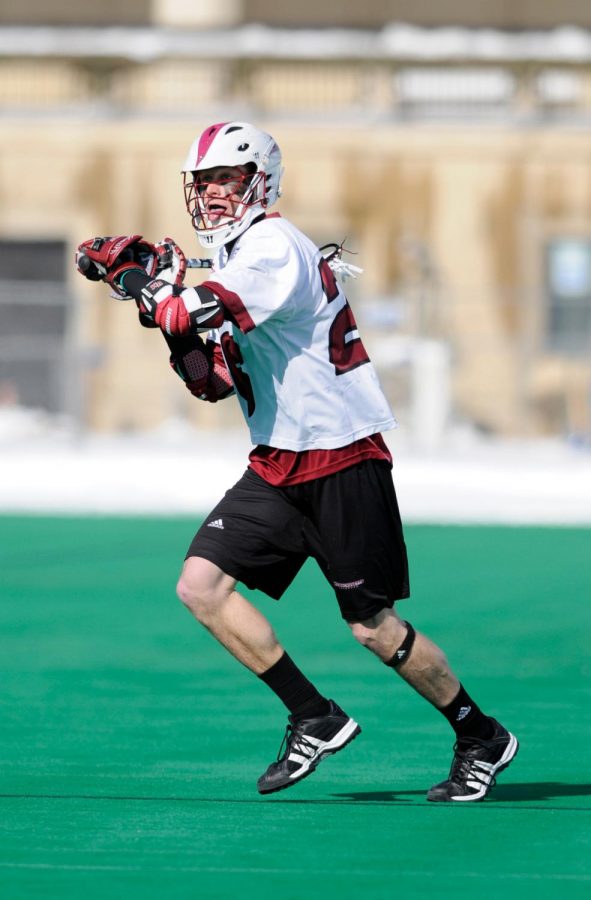 Lacrosse Coach Connor Mooney is leaving this year and his players are already feeling the loss. For the longtime coach and father of two, it’s the right choice.
“For now I need to be a dad for a little while, that’s the plan,” Mooney explained. “I’ve been on the lacrosse sideline for quite literally my entire life. I went to my first game when I was 11 days old. My dad was a high school coach so I was a youngin’ on the sideline with him.”
Mooney said he’ll always cherish the game, and isn’t ruling out coming back to it as a coach after a few seasons away. “But for right now I have two wonderful daughters and they need to be priorities in my life,” he said.
Mooney learned the game from his father and long-time coach Russ Mooney. In high school, Mooney had 245 goals and 131 assists as an attackman at Avon Old Farms, in Avon, Conn. His senior year, Mooney was a Captain and offensive MVP, earning many awards and recognitions within the Founders league. Mooney was also the Captain of the soccer and basketball teams.
He committed to the D-1 University of Massachusetts Lacrosse team, where he had an immediate impact.
In his first year at UMass, Mooney scored 14 goals and had two assists, and was named to the CAA All-Rookie team. By the end of his time at UMass, Mooney was named Captain and tallied 63 goals, 38 assists, and earned piles of accolades.
Mooney graduated from UMass in 2014 with a degree in sports management before deciding to get into coaching with his father at Western New England University while studying business administration. After a short time there, Mooney got into coaching a team in the 3D Lacrosse Club, an elite summer lacrosse team, which led him to the head coaching job at Williston.
At Williston, Mooney has made a major impact on his players that will last a lifetime. Noah Fox, a first-year junior recruited by Mooney, said Mooney’s influence has been pivotal to his performance.
“His biggest impact on me has been teaching me how to stay focused and locked in and just keep moving forward, even if you’re making mistakes, just always learning from them and just doing it better the next time,” Noah said. “He’s developed me more as an overall player, he’s been teaching me how to move off ball more and just how to be a better leader on the field.”
Like others, Noah will miss Mooney next year.
“I’ve learned so much from him and I’m grateful for all that he’s taught me,” Noah said.
In my personal experience, Mooney has been a great coach and I have learned many valuable lessons. Ever since my freshman year, Mooney has believed in me and taught me how to handle the ball and play smarter defense. Mooney was also a big piece of my college recruitment process, constantly reaching out to schools I was interested in and putting in a good word for me. Without Mooney, I would not have been able to play lacrosse at the next level.
One of Mooney’s favorite parts about Williston is finding the right colleges for his players.
“It’s one of the best feelings for a coach when a kid puts in a lot of time and effort in the classroom as well as on the field, and we can find him a good home that fits his academic needs and lacrosse needs,” he said.
Last year, Mooney helped find homes for athletes Adam Thistlethwaite (University of Albany), Brodie Fazio (Connecticut College) and Quinn Berry (Bates College).
Joe Easton, a junior and member of the varsity squad, will be one of the players most impacted by Mooney’s departure.
“Coach first selected me to be on the varsity roster in my 8th grade year, and I think that is where my love of the game truly picked up,” Joe, from Southwick, Mass., said. “Seeing the culture, work ethic, and vision Coach Mooney installed in the program made it very fun to compete and improve my skills at a young age. This is something I will carry with me going forward.”
He went on: “I think not having Coach Mooney next year is going to be very sad. Coach put a lot of faith in me as a person and player and challenged me to get better every time I stepped on the field.”
Joe is confident even though Mooney won’t be on the sidelines, he’ll still be in his corner.
“I know he will always be one phone call or text message away and will always be there if I needed something,” he said. “I thank him greatly for his time here.”