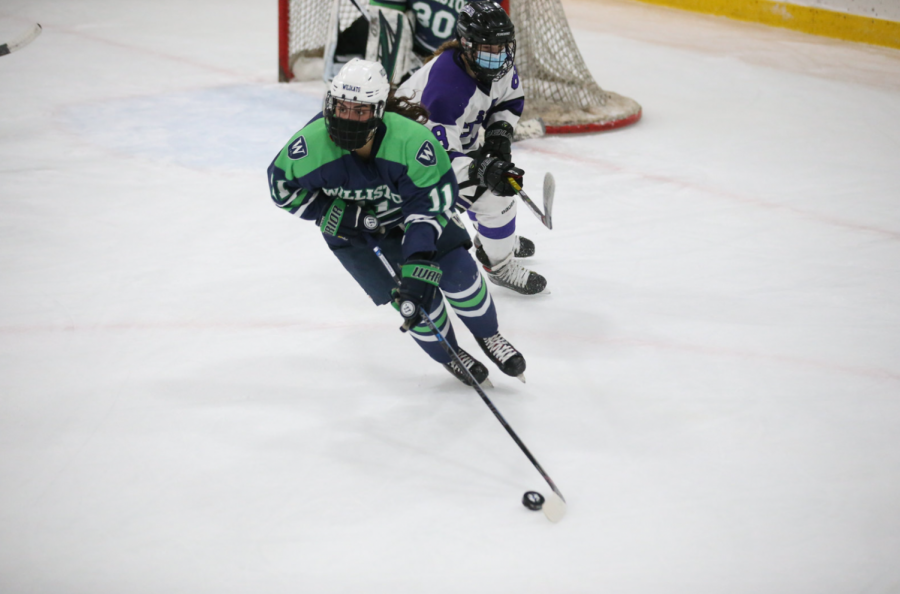 Three-sport athlete and hockey extraordinaire Jules Constantinople is gearing up for her final year on the ice.
Jules has been playing hockey since the age of four, where she started playing defense for the East Haven Yellow Jackets. She played for them for 11 years. Jules has also played for the CT Shoreline Sharks, and the CT Polar Bears, all at defense. Her Williston hockey career began four years ago as a repeat first year from East Haven, Connecticut.
In her fourth year at Williston, Jules is confident her decision to come to Williston was the right one, because of both the hockey and the people.
“Being at Williston has been the best choice for my hockey career,” Jules said. “The team and the coaches have supported me through everything.”
Alex Tancrell-Fontaine, an Assistant Coach of the Girls Ice Hockey team, praises Jules’ contributions to the program on campus.
“In her hockey career at Williston, Jules has been a great teammate to her peers. She wants to win and succeed and understands in order to do this, it takes everyone,” Tancrell-Fontaine, who the hockey team refers to as T-F, said. “Her competitiveness permeates to those around her and helps the team continue to move to the next level.”
Christa Talbot Syfu, the Head Coach of the Girls Ice Hockey team and Jules’ advisor, shares how Jules presence is the perfect blend of competitiveness and fun.
“Jules brings a drive to win and be the best. She is a fierce competitor and she has a work ethic and a drive that is very focused on being her best. She expects a lot of herself, and in turn she raises the bar for those around her on the ice,” Talbot Syfu said. “Off the ice she wants to have a lot of fun; she knows how to make people laugh, cheer people up, and she tends to be somebody that everyone goes to for support, advice, and looks to when they want to also have some fun.”
Jules’ teammates echo both coaches’ feelings that she has contributed immensely to team culture in her four years here at Williston.
Caroline Aufiero, a two-year sophomore from Belmont Mass., has only been through one hockey season with Jules, but one year is all she needs to speak highly of Jules as a both a teammate and a competitor.
“Jules is a teammate that everyone wants,” Caroline said. “Not only does Jules bring joy, happiness, and respect to the hockey program, but she brings her competitiveness. Jules works hard during every practice and every lift. She pushes people to be the best they can be on the ice or in the gym.”
Maeve Reynolds, a four-year senior from Plymouth, Mass. who has been teammates with Jules in and out of school for four years, agrees with Caroline.
“Jules is one of the best teammates anyone could ask for,” Maeve said. Maeve also recognizes the immense impact Jules has had on the hockey program, not only as a remarkable player, but as a person.
“Jules has made the culture on the Girls Hockey team very fun, accepting, and energetic. She is somebody that everyone looks up to on the ice and knows when to be serious, and when to have a little fun,” Maeve said. “She makes the environment really enjoyable and positive. She also makes everyone work harder on the ice and gives every skate everything she has, pushing everyone to do the same.”
Although Jules is most known for her hockey skills, she is versatile in her athletic capabilities; she is an integral part of both the field hockey and softball teams. Jules admits that it was odd at first playing three sports, as growing up she only played hockey, but she’s glad she has become a three-sport athlete.
“Personally,when I first came in I wasn’t a fan of it. I’ve never played three sports at once so it was very different for me,” Jules said. “But now, I think playing three sports has helped me as a human and as a teammate. It’s helped me balance out my social life but also its helped me learn what being on a team is really about.”
T-F, who coaches Jules in Field Hockey, recognizes Jules’ wonderful contributions to the Field Hockey team.
“She wants to win in everything,” T-F said. “This drive has allowed her to be a starting asset on the Field Hockey team, playing left handed and never having picked up a stick before. She has definitely helped the culture of all the sports that she plays at Williston.”
Erin Davey, the Head Coach of Williston Softball, loves having Jules on the team and believes playing softball has allowed her to grow as a leader.
“Jules has always been a fierce competitor – where I have seen the most growth is in her leadership and game IQ. Softball has allowed Jules to let loose and take some pressure off!” Davey said. “Jules has developed as a leader … and as a person. People look up to her and emulate her because of her work ethic and attitude.”
Following this year at Williston, Jules will continue her hockey career at Northeastern University, a Division I program currently ranked sixth in the nation.